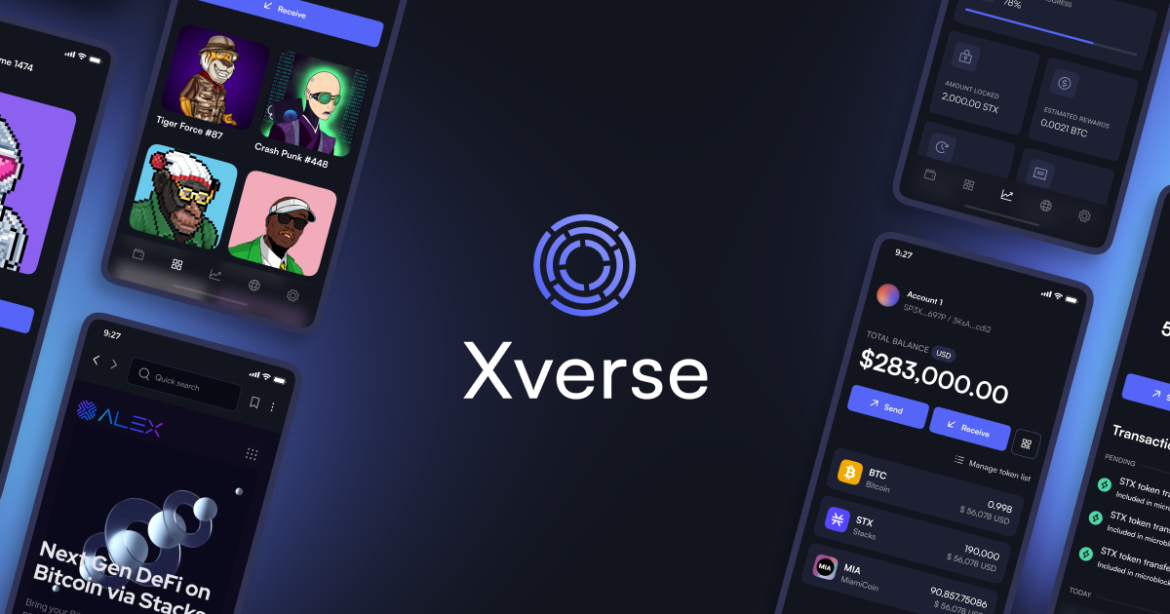 We often hear that Bitcoin is only a reserve of value and that it is not possible to build on it. The Xverse wallet, powered by Stacks, is basically proving that you can, in fact, have it all.

Launched in January 2021, Stacks is a smart contract layer for Bitcoin. It enables decentralized DApps to be built on top of the most secure network on earth: the Bitcoin network.

The Xverse wallet is a powerful tool for Bitcoin enthusiasts, enabling users to take advantage of the advanced capabilities provided by the Stacks Bitcoin layer.

To understand what the Xverse wallet is, you need to understand Bitcoin layers, specifically Stacks. Simply put, Stacks brings smart contracts to Bitcoin using a unique proof of transfer “PoX” consensus mechanism. This means it operates alongside the Bitcoin blockchain and uses it as a secure means of broadcasting its block headers. To keep it simple, blocks are built upon one another, making it increasingly difficult to corrupt a block, similar to Bitcoin.

Furthermore, Stacks uses the Clarity programming language that was specifically designed for programming Bitcoin smart contracts with a primary focus on security.

By design, Clarity is safe because of 3 main features:

Stacks’ innovative PoX enables users to earn BTC by staking, or “stacking”, their STX tokens (STX being the native token of Stacks). In summary, Stacks provides programmability to Bitcoin , leveraging its security.

What is the Xverse wallet?

Xverse is a cutting-edge Bitcoin wallet that allows users to connect to Bitcoin DeFi, decentralized apps,  and digital collectibles (NFTs) powered by Stacks. Users can also purchase STX tokens, BTC and other SIP-10 tokens in the app using a fiat on ramp service, including Binance, Moonpay, and Transak. Its non-custodial design aims to be the go-to option for Web3 interactions on Bitcoin through Stacks. It offers a range of features, whether you want to trade NFTs, utilize DeFi protocols or earn Bitcoin rewards by stacking your STX. The Xverse wallet is available on mobile and desktop devices, providing users with the ability to unleash the power of Bitcoin.
Xverse wallet has four main features that you can enjoy on multiple accounts:

How to use the Xverse wallet?

The Xverse wallet can be accessed on mobile devices (iOS and Android) and as a browser extension, providing flexibility for users. One of the convenient features of the Xverse wallet is its ability to easily import other Stacks wallets by simply using the same seed phrase, allowing for easy access to previously created wallets such as Hiro, Boom and Dcent.

To support the Stacks blockchain, you have the option of staking (“stacking”) your STX tokens. As a reward for stacking, the PoX protocol will provide you with BTC, which is transferred to the protocol by Stacks miners to mine new STX.

Using the Xverse wallet app, you can access the STX staking pools, which are user-friendly and easy to navigate even for beginners. Once you lock up your STX tokens into the stacking pool, you can begin staking in the next cycle. BTC rewards are distributed at the end of each cycle. The app will display a summary, including the current cycle state, end time of the current cycle, estimated yield (APY%), and pool fee. You can choose the amount of tokens to lock and the duration of the locking period, but keep in mind that you will not have access to the locked STX until the end of the selected locking period.

You can also stake your STX with Binance, but this is a custodial solution, meaning that you will not be in full control of your own crypto assets. With Xverse, your STX never leaves your wallet in the stacking process.

NFTs on Bitcoin with the Xverse wallet

What? NFTs on Bitcoin? Yes, sir!
Thanks to the integration of Stacks, NFTs have now been introduced to the Bitcoin ecosystem. There are already a variety of NFT collections available such as Bitcoin Name Service “BNS” (.btc usernames) or digital art collectibles like Crash Punks, Megapont Ape Club, or Satoshibles. These can all be displayed in the Xverse Wallet after purchasing them from the various Stacks NFT marketplaces. In fact, Xverse is the first wallet enabling Bitcoin NFT owners to view their NFTs in their wallet on desktop with the browser extension.

The main NFT marketplaces on Stacks are:

There have already been several successful NFT collections on Stacks like:

But there is a lot more to come: new NFT marketplaces, DAO’s, DeFi protocols and aggregators, launchpads, social platforms… The possibilities are endless!

What is the future of Xverse

The Xverse team is currently working on their 2023 roadmap, with many exciting updates on the way!

The Team Behind The Xverse Wallet

The team at Secret Key Labs includes developers and engineers who were part of the original Stacks team. The Xverse team is composed of a diverse group of individuals, including software and business developers, as well as Web3 experts, many of whom possess extensive programming experience, thanks to their previous work on the Stacks project.

As with every project I’ve written about, I’ve checked out the Xverse community on Discord and I must say they are very active! See a selection of reviews from some of their most prolific users below:

If you’re interested in a wallet at the crossroads of Bitcoin and Stacks: Xverse is for you. You will benefit from a highly secure wallet and be able to purchase BTC, STX and all the Bitcoin NFTs from the different Stacks marketplaces. Imagine being one of the first to own an iconic art piece from this skyrocketing universe? The Stacks ecosystem may contain hidden gems, and the Xverse wallet makes it easy to discover them.

n.b: this is not financial advice

What Is The Crypto Philosophy?