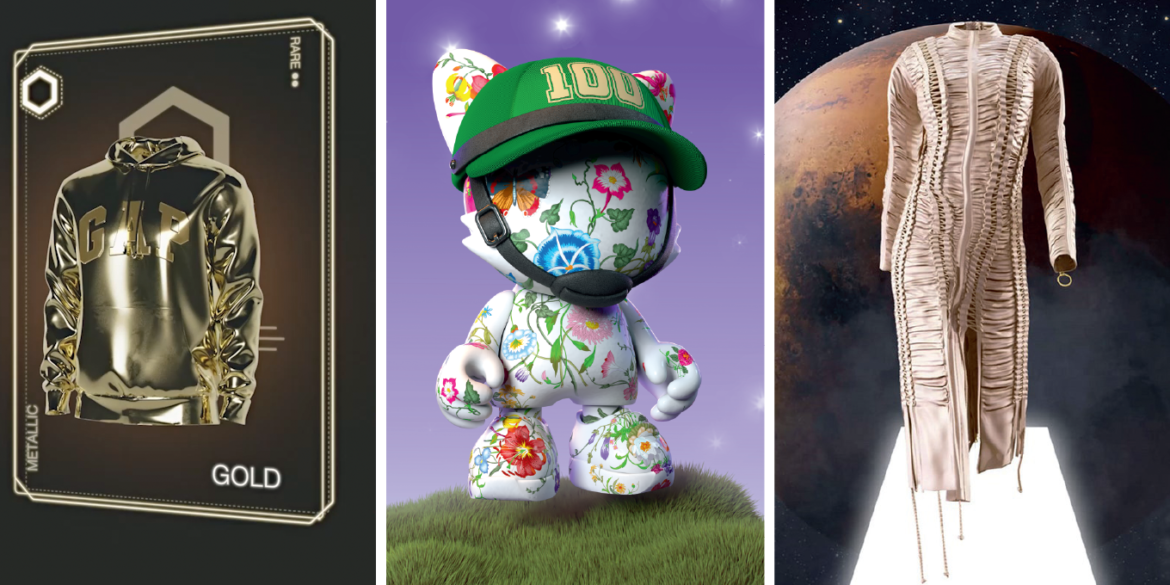 The NFT space is the home of innovations that are changing different industries from the gaming ecosystem to the fashion terrain. Different types of tokenized and digital fashion apparel exist in the fashion industry. Users can actively design their accessories, own them, sell their apparel to others and even use them in a Metaverse, virtual environment or sold in marketplaces. Different fashion brands are creating the best fashion NFT projects.

In fact, new Metaverses are being developed to incorporate fashion NFTs and improve their value and utility. For example, fashion houses are becoming more invested in this technology to the extent that prominent names like Gucci, Adidas, and Gap have dipped their toes.

What is an NFT?

In practice, the ownership of an NFT is recorded on a blockchain. For example, NFTs can hold different types of content including music, books, videos, art, and even fashion accessories. In brief, a Fashion NFT is a digital asset that represents the tokenized version of fashion apparel.

The Fashion NFT industry has caught the interest of prominent fashion houses including Dolce and
Gabbana. In fact, this notable Italian fashion house launched its NFT collection called the Genesis Collection or
Collezione Genesi. In addition to the virtual NFT, it also launched its apparels in physical forms.

At the time of auctioning, it was worth $5.7 million. For example, It partnered with luxury marketplace UNXD to launch the NFT wearables.

The British fashion house joined the league of reputable fashion brands to release their NFT series in 2021. In fact, the clothing firm partnered with Mythical Games to create a blockchain game called Blankos Block Party. Also, it featured its rare NFT collection, B Series, in the game.

There is hardly a sportswear lover that has not heard of Adidas. In fact, Adidas has grown to be a household name for different types of apparel from clothing to shoes. In 2021, Adidas announced that it was partnering with gMoney, Bored Ape Yacht Club, and PUNKS comic to launch its NFT series called ‘Into the Metaverse’.
Indeed, according to its creator, holding an Into the Metaverse NFT allowed the user to explore different virtual and physical products from the fashion company.

Popular clothing brand, Gap, announced in 2022 that it was launching its NFT collection. Indeed, part of exploring this digital technology was to offer its clients access to a gamified experience. Gap partnered with Brandon Sines, the artist that designed Frank Ape. The NFT collection includes limited edition Gap digital hoodies, which are based on the Tezos chain.
Secondly, its exploration in the digital space did not end there, as it released a single edition digital art, as well as a rare denim jacket.

Furthermore, Gap has also entered into a partnership with DOGAMÍ, a petaverse game to release NFT wearables that are utilized in the game.

Nike acquired RTFKT Studios in 2021, making it a subsidiary. The Studios decided to launch digital sneakers, which sold out almost immediately. To achieve this, it entered into a partnership with FEWOcious, a digital artist. Also, as part of the collection, both parties launched digital and real sneakers, which made over $3.1 million at the point of sale.

In fact, before the sale, potential buyers were permitted to try on the sneakers. Actual buyers were given the option to redeem their digital sneakers for the real copy.

Givenchy currently sits at the zenith of the French fashion industry. In fact, this prominent fashion house launched a series of 15 NFT graphic designs after entering into a partnership with Chito. Chito, a notablemgraphic designer, incorporated features from the spring pre-collection of Givenchy into the NFT collection.

Karl Lagerfeld (KL), a luxury fashion house, created two types of NFT collectibles after partnering with a London-based artist known as Endless. Indeed, the KLxEndless is the first NFT collection and it has 500 figurines of one NFT. It was priced lower than the second collection.
In the second NFT collection which is called the KL7xEndless, the fashion house, incorporated rarer
pieces, which sold for 777 euros. Only seven pieces were minted. Both NFT collections were sold on an NFT fashion marketplace called, The Dematerialised. They created one of the best fashion NFT projects.

The Dematerialised is a popular NFT fashion marketplace that has entered into partnerships with
reputable traditional and Web3 fashion brands. This marketplace offers creators the tools to design
their virtual fashion apparel while allowing collectors to explore different NFTs. In fact, every NFT created in this
Web3 collection is based on the LUKSO chain.

Neuno is another Web3 digital asset marketplace that allows individuals to buy and sell fashion NFTs. Indeed, like its counterpart above, neuno has links with reputable fashion houses, offering a wide array of rare fashion pieces and assets.

As a result of the pandemic and worldwide lockdown, organizations have opted for virtual means of getting things done. Organizations in the fashion industry are adopting virtual elements. In fact, the French Fashion and Haute Couture Federation entered into a partnership with Arianee to launch an NFT series.

Secondly, they have real-life utility because they could be redeemed in different popular fashion exhibitions in Paris and other parts of the world.
Thirdly, it permits its owner to take a peek into fashion apparel that is not available to the public.

One of the maestros of high-end fashion apparel, Louis Vuitton released an adventure blockchain game called, Louis the Game. In fact, It was launched to commemorate the 200th birthday celebration of the fashion house’s founder. Louis Vuitton partnered with popular digital artist, Beeple to create some of the in-game NFTs.
For example, players explore the land, while they look for thirty hidden NFTs.

This is an NFT fashion brand that sells unique NFT-related hoodies. They are physical hoodies that possess a VR code, which can be used in verifying the owner of the digital version of the hoodie. For example, owners of these hoodies can nullify the virtual form or NFTs if they are stolen.

This DAO is a fashion NFT DAO that is involved in purchasing and investing in digital fashion apparel. Indeed, it is at the forefront of collecting fashion NFTs with great potential.
Indeed, as a fashion DAO, RedDAO has members that are interested in owning rare fashion NFTs like the Impossible jackets and the Doge Crown NFT designed by Dolce and Gabbana.

n.b: this is not financial advice

What Is Wolves of Rome Trading Card Game (TCG)?

What is Saitama Crypto (SAI)?